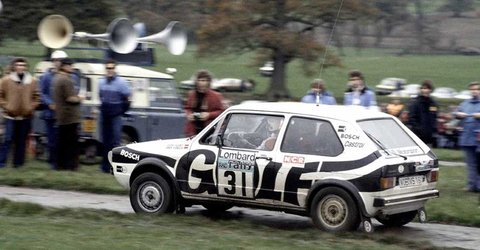 Chris Hellings : we’ll be flying the flag for Woolbridge on the (now legendary) Roger Albert Clark in 2 weeks time in the Group 2 Mk1 Golf (a few pics attached). The event runs from the 25th – 29th November and we’ll be covering over 320 stage miles (just shy of 1200 miles in total) over the 5 days – rallying a bit like how it used to be!

Despite a decent showing 4 years ago (where we were 1st FWD Historic, 1st in Class and 38th O/A) we’ve been seeded a lowly car 130 due to a lack of outings over the past couple of years, however, we had a decent run on the Cambrian two weeks ago and provided the car stays reliable we’re hoping for another decent finish.

The car is full FIA Grp2 Spec Historic and we’ve put it together as a replica of the 1978 RAC car 31 (pic attached). There’s not that many period FWD cars out there and we’re the only Mk1 Golf competing so it normally draws a fair bit of attention.

I’ve dragged my brother out of a 10 year retirement from navigating and so he’s joining me in the silly seat, but he’s a hardened classic trialler so shouldn’t have any problems with the lack of sleep. We’ve also got Exeter-based Historic Motorsport SW looking after us as usual, so should anything go wrong we’re in safe hands.

Anyone interested will be able to keep a tab on all of the live results, video feeds and end of day highlights via Roger Albert Clark Rally on facebook or go to the website http://racrmc.org/.